We provides information on purchasing apparel materials for corporate customers from Japan.

Button’ shapes and types: Which one is suitable for your design? 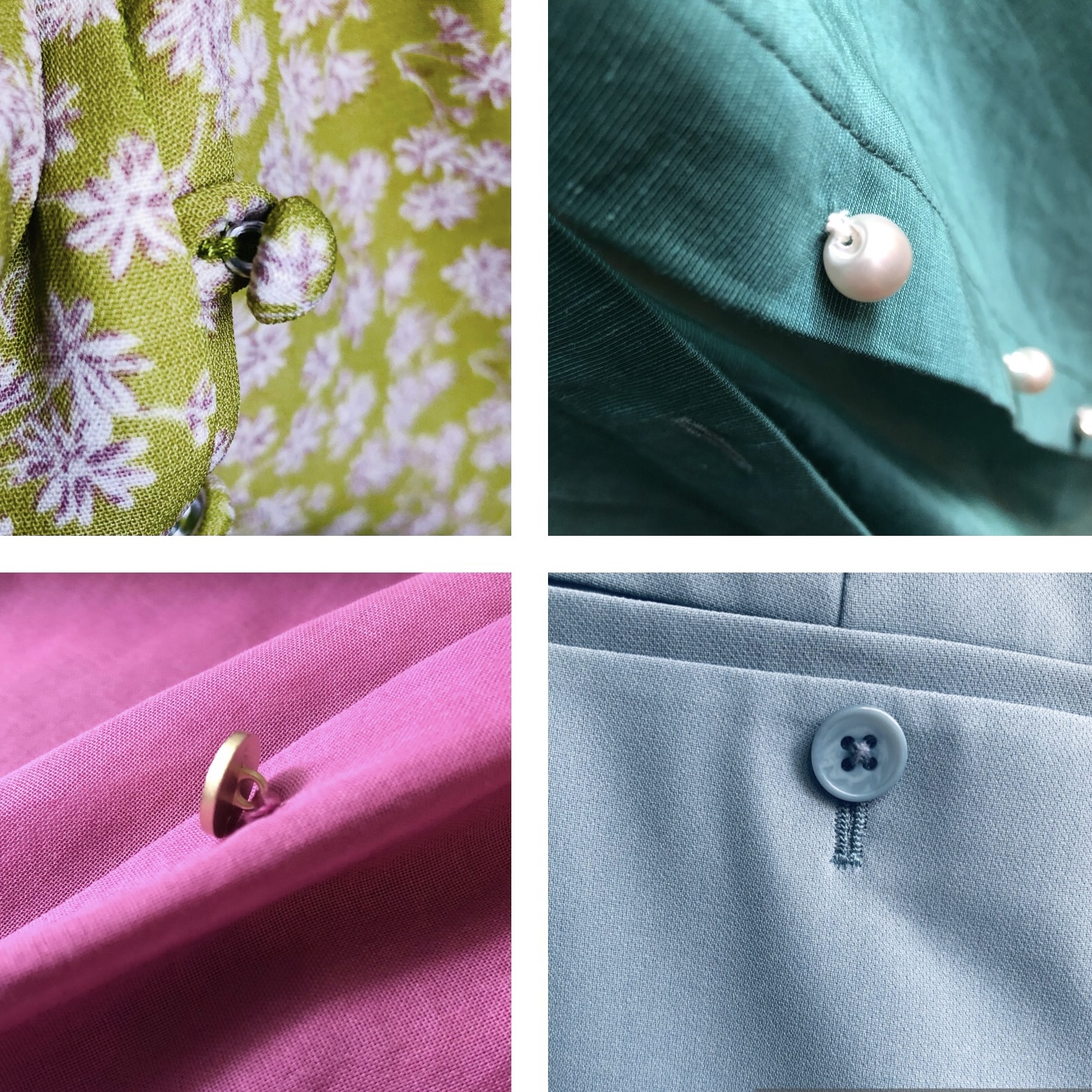 Button is one of the important trims of the design.

Buttons used for clothing can be round, oval, or square, and there are many different types, such as the number of holes and the way they are attached to the foot.

In this article, we would like to introduce the shape of sew-on buttons, how to use them, and what kind of buttons they are suitable for.

This shape is probably the first thing you imagine when you hear the word “button”.

Four-hole buttons have many fixing points, so they can be firmly fastened to the fabric and give a sense of stability.

They are often used for a wide range of applications, such as buttons on white shirts, the butt pocket portion of slacks, and thicker fabrics such as coats, suits, and jackets.

The type 17 shell button in the photo above is a royal button for white shirts.

If you say “type 17 shell button” to a clothing accessory shop, this four-hole, rimmed shape will be conveyed.

Two-hole buttons, on the other hand, have the advantage of being easy to remove because they have fewer points of attachment to the fabric.

Some shell buttons are numbered 2H for two holes and 4H for four holes.

These buttons have incisions around the button hole like a cat’s eyes.

These grooves make it difficult for the threads used to sew the button to the surface, thus preventing the threads from fraying.

Many small-sized buttons are used for shirts and blouses.

The tanuki holes are larger on the front side of the button hole and narrower on the back side.

It seems that this shape of button has existed in Japan for a long time, and it is said that it is a uniquely Japanese button.

The slanted, gentle hole in the button makes it difficult for the sewing thread to fray and break.

It is a part that cannot be seen unless you take a closer look, but it is surprising that such detailed consideration is utilized in the button holes.

Some shell buttons have metal feet on the back side.

They are often used for women’s blouses and cardigans.

Kurumi-buttons, which are made by wrapping fabric, are also often of the type with a foot on the back due to their structure.

Since kurumi buttons can be made with co-woven fabric, they have a three-dimensional appearance while harmonizing with the fabric, allowing for a design element to be added to the garment.

As the name suggests, this button has a tunnel-like hole on the back of the button.

It can be stitched to the fabric stably, but it may be difficult to pass through the buttonhole because there is no space between the button and the fabric.

These round buttons are recommended as decoration for women blouses and cardigans.

The parachute button has a hole shaped like two broad horizontal lines.

This is to allow the passage of tape, etc., and is based on the buttons originally used on jackets worn by paratroopers in the military.

The buttons were made sturdy by sewing tape through them so that they would not come off even if a load was applied when jumping down with a parachute.

Today, they are often used on men’s casual shirts and military-style jumpers.

Compared to ordinary buttons, toggle buttons have a distinctive shape and are quite large.

In fact, duffle coats were originally the work clothes of Scandinavian fishermen.

It is said that it became the winter wear of the British Navy, and the duffle coat spread into the fashion world.

Since toggle buttons were used for winter clothes, they became large and easy to grab so that they could be easily put on and taken off even when wearing gloves.

A solid cord of hemp or leather is threaded through the toggle button, and the button loop is often made from the same cord.

Toggle buttons can be made of buffalo, wood, plastic, etc.

In addition to round buttons, there are also rectangular, oval, and leaf-shaped buttons.

You will have more choice for decoration when using unique shaped buttons.

Power button is a small button attached to the back side of the front button. For more information, please take a look at our article about Power button

They are often used on the back of buttons on coats and jackets, where the fabric is thick and force is easily applied, to disperse the force applied to the button. They prevent the buttons on the front from coming undone and prevent the fabric from being damaged when pulled.

In the case of rough fabrics and knits, they prevent buttons from falling out.

In addition to plastic power buttons, felt or leather may be hollowed out in a round shape.

Power buttons were quite small, about 8 mm in diameter, but how big are large buttons?

These buttons are directly imported from Italy by GAFFORELLI, an Italian button manufacturer. The largest size is 45mm! If you put it on your coat, it will surely have an outstanding presence.

Buttons are small parts in clothes, but each one of them has a role or function. Also, depending on the design, buttons have the power to change the impression of the outfit.

Writer
Jane
Hi guys, this is Jane, the editor of ApparelX News. As a foreigner living in Tokyo, I hope my posts will help international readers get an overview about Japanese fashion industry as well as Japanese culture!
Facebook Twitter Hatena Pocket LINE
Recommend
2022-11-24

Denier and yarn count: What do they mean?

We provide apparel materials and fabrics from Japan to the world on Global B2B Apparel Sourcing Platform “ApparelX“.

This website provides information on apparel materials and the apparel industry in Japan.